How many of you out there live in a first world democratic country, yet keep hearing about how you actually live in a “Police State,” “Military State,” or my personal favorite, “Fascist State”? Living in Toronto, I hear about it all the time, especially loudly from the slew of protests this city has experienced in the past few years. I’ve seen the slogan on Facebook display pictures, internet meme’s, and cardboard signs being held on the street. It’s strange that so many of us can go about our daily lives without even realizing the extent of suppression we experience on a daily basis. 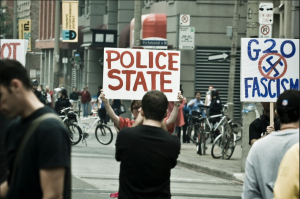 But alas, perhaps we really do live in a police state. I remember this one time I posted on Facebook arguing against a government policy and was taken in for questioning. Unfortunately, habeas corpus didn’t apply and I was stuck in jail for a few months until my family could accumulate the necessary bribe money. I also remember that time Quebec wanted sovereignty. Of course, that was only until government troops massacred 10,000 people in Trois-Rivières.

Oh wait… none of that happened. Do you know why? Because Canada is not a police state.

Is anyone saying yes?

Quite frankly, I’m sick and tired of hearing whiney self-entitled first world kids saying so. I myself am a whiney self-entitled first world kid. The difference is that I know it, and I certainly know the amazing rights and protections my country affords me. So maybe I’m entitled, but I’m also appreciative of, or at  least under no false impressions about, the rights I have. I think the same is true for most of us, but I just can’t understand the fools who actually believe this. I tend to think that a lot of them don’t even believe what their saying. It’s just a catchy, but empty, sound bite for them and it looks nice on a cardboard sign. Either way, from personal experience I do know that some people actually believe it, and I can really only think of two ways this could happen:

1)   They are completely ignorant of what goes on in other countries. I thought about making a list, but it’d be easier just to list the countries that aren’t on it (like Canada).

2)   They are so delusional about their own wants, that they honestly think that whenever they don’t get exactly what they want, the state is suppressing them.

Perhaps there are more, but given this set of possibilities I’m almost hoping that its usually #2. I mean, are people really ignorant enough for #1 to be true? That would be quite a startling revelation. The internet is supposed to globalize society, but can people really be so caught up in Kim Kardashian’s life to ignore the easily viewable horrors of living under a despotic ruler? Maybe I don’t want the answer to that question.

The ones who actually believe it may even be better than the ones who don’t and still say it. At least they are actually ignorant or delusional and not rubbing the reputation of our great country through the mud for trivial political interests. You would think those holding the signs labeling Canada a police state would realize fairly quickly that they aren’t actually in a police state by the simple fact that they are still standing and holding that sign. You can’t call it a police state in a real police state, because you end up in jail. It’s really as simple as that.

Are our cops perfect? By no means, but they deserve a little more respect than to be compared with their North Korean counterparts. Next time you hear someone saying it, correct them, and ask them if they would prefer to relocate their protest to Pyongyang (the capital of the Democratic People’s Republic of Korea, i.e. North Korea). Follow that up with asking if they wouldn’t prefer protesting an actual police state. Of course, if they are too selfish for that endeavor they can always just protest the problems we actually do have, there is no shortage.

4 thoughts on “The Democratic People’s Republic of… Canada?”