KRAXFACTS are meant to be a short synopsis of the intended subject which can also help to provide context for related discussion. See a complete list of KRAXFACTS here.

In 1910, Imperial Japan conquered the Korean Peninsula, which they ruled until loosing the Second World War.  In the aftermath of the war, the Soviets and US agreed to jointly capture the peninsula from the Japanese.  The Soviets would move in from the north, while the Americans would land from the south, both halting their advance at the 38th parallel. At the Postdam conference of 1945, the Allies unilaterally agreed (without the consent of the Koreans) that they would divide Korea thusly.  Later that year, at the Msocow Conference, they decided that the US and the Soviet Union would jointly control the country for a 5 year period, at which point Korea would gain independence.  The North would be led by Kim Il Sung, while the South would be led by Syngman Rhee, influenced respectively by the Soviets and Americans.  Revolts started throughout the country, in the North against communist rule and in the South for communist rule.  These events cause a heavy-handed government responses, many times resulting in massacre.  Paramount among them, the Jeju Uprising (and later massacre) where in April of 1948 on the Island of Jeju (just south of the Korean Peninsula) thirty to sixty thousand people were killed by the South Korean government and allied paramilitary forces.  On May 10, 1948 South Korea held its first elections to the consternation of the Soviets Union and the North, who further disengaged from negotiations.  In May and April of 1950, Kim Il Sung travels to Moscow and Beijing, securing support for an invasion from both Stalin and Mao, but only receiving a commitment for direct involvement from China. 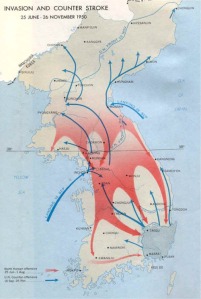 This map illustrates the back and forth movements of the opposing armies and also clearly outlines the Pusan Perimeter in the Southeast of the Peninsula.

On June 25, 1950 the North invaded the South, taking them by surprise.  The under-equiped and under-trained South Koreans quickly lost Seoul, and the North pushed all of the way to what become know as the Pusan Perimeter, a small beachhead in the southeast of the peninsula.  In response to the aggression from the North, the UN unanimously condemned the act and placed its support firmly behind the South. The US having substantial forces closeby in Japan, quickly reacted and under the command of General MacArthur, was able to hold the perimeter for the South, with US soldiers first landing in Pusan on July 1st.

After heavy deliberations and strong opposition MacArthur was able to convince the establishment of his plan to invade the North through an amphibious landing, which were to take place at Incheon.  On September 15 of 1950 MacArthur used the US and Canadian navy to land a hastily assembled US X Corps at Incheon and flank the Northern troop operations south of the 38th parallel.  This action cut the supply lines of the Northern troops and by October, MacArthur had captured both Seoul and Pyongyang.  With the Northern army reeling from the UN’s offensive, MacArthur manages to push almost as far as the Yalu River, the dividing line between China and Korea.  In January of 1951, Chinese worry led them to support a strong retaliatory offensive against the South, pushing UN forces south and eventually retaking Seoul for the North.  In March, MacArthur counter attacks and retakes Seoul eventually leaving the 38th parallel, once again, as the dividing line.  Two years later (July 27 1953) an armistice is agreed upon, dividing the peninsula exactly as the US and the Soviet Union envisioned eight years prior.

There has never been a peace treaty, and therefore technically the two Korea’s are still at war. This war is considered to be part of the greater Cold War between the two dominating ideologies at the time, capitalism and communism. The 38th parallel and the surrounding area, remains today the most militarized border on Earth, ironically known as the DMZ (de-militarized zone). In the meantime, the South Korean government has made significant strides towards democracy, having released itself from the shackles of dictatorial rule in 1987, and electing their first civilian president in 1992. It has built for itself a powerful economy, and has significantly improved the welfare of its citizens in doing so. In 2005, the South Korean Government set up the Truth and Reconciliation Committee to look into its misdeeds, and officially apologized for Jeju in 2006. By contrast, the North Korean government has kept its people in abject poverty, spends much of its income on military buildup and refuses to allow them to take part in the globalizing world. The effects of this conflict will continue to exist for the foreseeable future.

This is a short description of the event. What can you add?